The fourth edition of the Vodacom Exetat 2022 scholarship officially started this Thursday, September 15 at the Sultani Hotel in Kinshasa. This is Vodacom Congo’s financial support through its Foundation for brilliant students who have passed the national exam to prepare them for an even brighter future.

With this action, the Vodacom Congo company, through its establishment, is part of the logic of the United Nations, which in its Millennium Goals gives an important place to the education and supervision of young people. The telecommunications company Vodacom Congo, in its choice to promote the youth, is actively involved in the materialization of this goal through the channel of its establishment which has made this sector its war horse.

Indeed, as usual, for this edition, 25 winners will be selected across the country after testing. And support will be available for all disciplines up to $1000 per year. Since the launch of the program, the Foundation has already supported 75 laureates from several provinces of the DRC.

“We have just released the results of the state exam and with it the rest of what we are opening the Exetat scholarship platform for candidates who may have scored 65% to apply (*42211#) . In any case, we are waiting for students or finalists from all over the Democratic Republic of the Congo to successfully apply and benefit from this scholarship. This scholarship, what is the advantage? Every year the user has about 1000 USD which allows him to pay academic and supporting expenses, which means everything we ask for, so Vodacom ensures that to the student or user”, Roliane Yulu, interim manager of the Vodacom Congo Foundation, explained to journalists.

Returning to certain eligibility criteria, Roliane Yulu assured the seriousness that exists within this Vodacom Congo program. Those who are still hesitating under the pretext that Vodacom Congo already has candidates are invited to try their luck.

“Compared to the criteria, you must be of Congolese nationality, have 65% or more, age group between 18.17. They will pass the test, everyone who applies will pass the test and we will choose the best. The Exetat scholarship is for finalists only. All the people you saw today (from the 1st to the 3rd edition), I don’t know anyone, I don’t know their names, by the way, among the criteria, there should be no connection with a Vodacom employee, we are very strict about that. We have a team that sees that we really manage to enforce the regulations, and we also work with the bailiff to ensure that the regulations are followed as they should be,” assured Roliane Yulu.

According to Albert Mboyo Ekofou, Marketing Director at Vodacom, the Vodacom Congo Foundation intends to cover the academic fees of the finalists for five years without fail.

“The scholarship continues, this year’s recipients who achieved a minimum of 65% continue their registration by going to our Vodacom Éduc platform. There is a tab for Exetat scholarship registration, to leave their names and then we will call them after the selection so that they can pass the competition and those who succeed in the competition can benefit from their scholarship. No matter where you are in the country, it is open to all Congolese. Usually every year we give scholarships for 5 years, when you get a scholarship, you get it for the faculty cycle, which is normally 5 years, and it’s like that every year”, pointed out the head of marketing of Vodacom.

On the occasion of the creation of thieves, the Vodacom Congo Foundation shared a meal with the beneficiaries of the scholarship of the three previous editions. The aim was to make them more aware that they are seriously investing in their studies.

“Today’s meeting was aimed at raising the awareness of our youth, especially those who received a Vodacom scholarship to continue their studies at the university. They must understand that this is a chance that has been offered to them and they must study properly so that tomorrow they will not be workers in their own country. Today, you know what difficulties parents have to finance their children’s education, and those who had that opportunity must not have fun. You know the scholarship principle: when you fail to advance, you lose your scholarship. We do not want our young people to lose this opportunity and to be able to continue their studies and finish and integrate Vodacom Congo already as a priority, because Vodacom already has an elite program that allows the best academics to start their work already at Vodacom without necessarily having any professional experience” , said Albert Mboyo Ekofo. 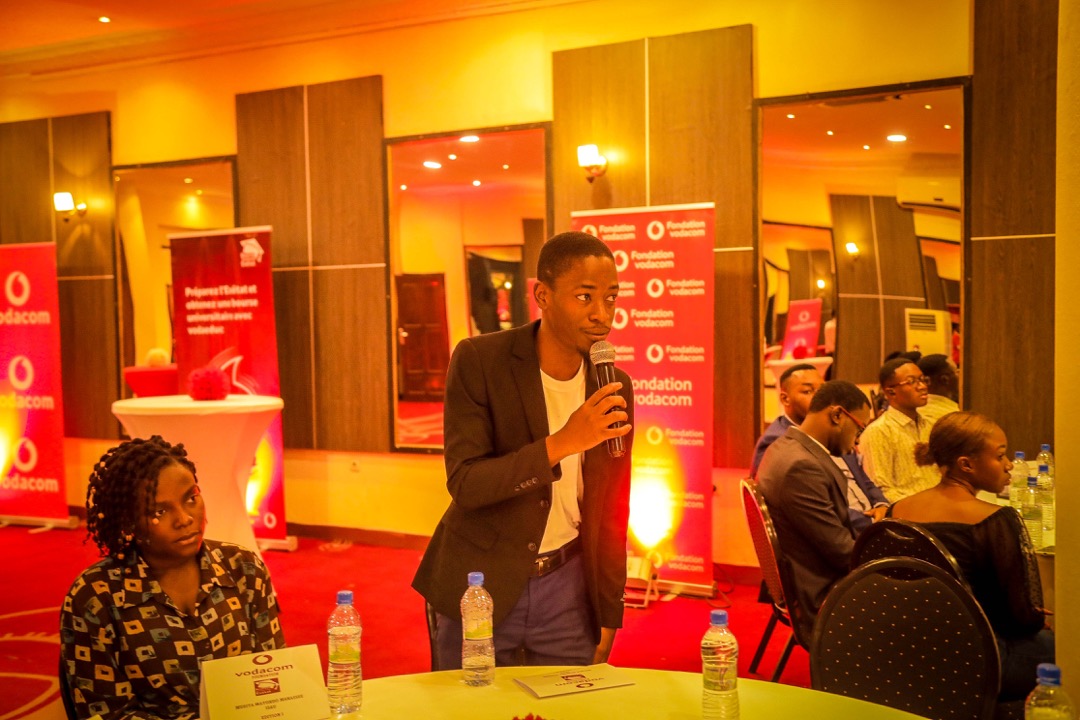 Grandfather Bambi, one of the scholarship holders, a 1st degree student at UNIKIN, said: “With an attitude of gratitude, I thank the Vodacom Foundation for this financial support that enabled me to finance my university studies.” Without this opportunity, I would not have been able to go to college after my state diploma. At the end of my license, I will dedicate my degree to Vodacom Congo. Once again, a thousand thanks to Vodacom for this gesture that will forever remain engraved in my heart”.

Vodacom Congo has been investing in training, empowerment and digital transformation of young people for two decades. Vodacom Congo through its foundation has several interventions in the education sector in its achievements. For example, in 2006 he recruited the best young graduates and gave them the opportunity to continue their university studies. Thanks to the Elite program, in 2011 he recruited the best finalists. A few years later, she set up a digital classroom with refugee children from Equateur province and allowed them to learn.

The free digital education program VodaEduc was launched in 2017, while the Vodacom scholarship is now in its fourth edition. This program, according to several observers, makes the task easier for certain parents who find it difficult to send their children to college.

The Exetat scholarship program is open to all students who obtained a state diploma during the academic year 2021-2022. years and who meet the following conditions:

1. be of Congolese nationality;

4. that you are a Vodacom subscriber and that you have a correctly identified number (minors cannot have a number registered in their name);

5. Check your results using the interactive menu dedicated to Vodacom

6. Enter your data (date of birth and 14 digits of the student) using the USSD *42211# menu dedicated to the Vodacom Exetat stock exchange;

7. Fulfill the selection criteria in point 4.