The 1948 Davis Devan offers four seats in a row. Really, this is not the only strange thing about this car, which is now auctioned on Amelia Island.

The collection of East Frisian jokes is rich in very flat obscenities. But even in this environment, the next joke still stands out on the open level scale at the bottom. He continues: “Why are East Frisian buses always nine meters wide, but only three meters long? – because everyone always wants to sit in front.” Once you make yourself laugh—or feel embarrassed, depending—we get straight to the point that makes this joke the beginning of this article: because the car in question provided the inspiration for this joke at the time.

It’s about the Davis Devan, built in 1948, which was recently sold by RM Sotheby’s at Amelia Island Auctions. The East Frisian motto is this car’s program: up to four passengers can be seated next to each other in a row; Starting from the driver’s left. do not you think so? Then feel free to watch the video above this paragraph. The exotic car easily picks up four adult men with a perfectly stocky build and rolls fast.

The parking scene initially reveals another special feature of the classic car: while two wheels are attached to the rear axle, there is only one front wheel, which is also used for steering. This seems to bring huge advantages in terms of maneuverability: in the video, the American car makes its way in and out of the gap in record time and finally demonstrates the miniature turning circle. And this, although not short at 4.72 meters. There are also other innovative ideas, such as the in-car jack seal, which can be activated from the cockpit – similar to modern racing cars.

In this photo you can only guess: there should be room for four adults on the seat.

Of course, none of the big American automakers invented Davis Divan. A second-tier brand—think Tucker, Kaiser Motors, or AMC—is not behind either. We owe the curiosity of the convertible three-wheeler to Glen Gordon “Gary” Davis (he’s behind the wheel in the video), an industrial designer and used car dealer from the US state of Indiana. Like many inventors before and after him, Wanted—inspired by a previously purchased race car converted into a tricycle, principles in aircraft design—with which Divan invented the lightweight, inexpensive ($1,000) car of the future, which is $11,666 today or roughly 10,676 euros currently). means) in addition to consumption, streamlined (also thanks to the pop-up headlights) and spaciousness on top of that: with this set of skills, Davis Divan was destined to conquer the US motoring world.

Mr. Davis was not only a skilled designer, technician, and salesman, but he was also blessed with a lot of criminal energy. Anyway, his Davis Motor Company was busy selling cars for cash to dealers and individuals all over the country. According to RM Sotheby’s, it made over $1 million from this, but without being able to get anything like serial production—it was supposed to start in Southern California—or even the ability to deliver vehicles to customers. No wonder the company had to shut down again in 1949 because its president went to jail for fraud. Then a handful of the diwan that had been built went into bankruptcy estate and was distributed to a number of creditors. Perhaps this was also the fate of this copy that is now auctioned.

As RM Sotheby reports in the car description, only 14 Davis Divan cars have been registered: two prototypes – the first was probably based on the aforementioned race car – and 12 other small-series production cars. Other sources name 16 cars: two prototypes, eleven production cars, and three military branches. This is version number three, so it’s the first of the Diwan series. It was built in 1948 and spent most of its life in Michigan after the collapse of the Davis Motor Company.

Rescued in 2011, then completely restored

However, it was clearly not well taken care of: when the last owner discovered it there in 2011, it was said to be in dire straits. As a result, he began a complete restoration process, during which the aluminum structure covered with removable panels was completely renovated and painted with brown metallic paint. The steel fiberglass roof is also new. Meanwhile, a beige and brown leather interior has also moved to the single-row car. 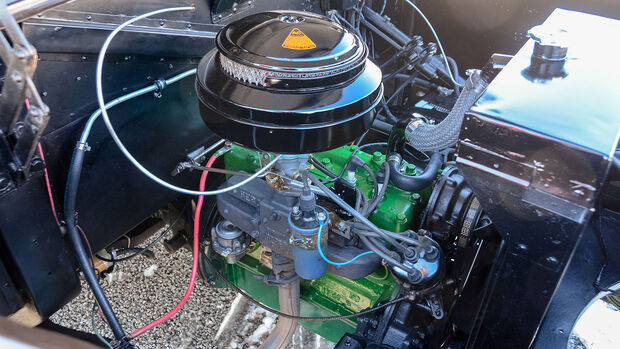 The four-cylinder Hercules engine is said to accelerate Davis Devan to a staggering 185 km/h.

The technology is also outdated. This also applies to the engine, which according to the auction house is a Hercules four-cylinder engine mated to a three-speed manual gearbox, which is said to speed the tricycle to a staggering 185 km/h. Other Divan models used other motorcycle aggregates.

No. I wouldn’t sit in something like that – too dangerous.

Anyone who shows up at a classic car event with Davis Devan is automatically the star of the event and has a lot to automatically tell about the car. However, it is better to do without an East Frisian joke – you do not want to alienate your audience.